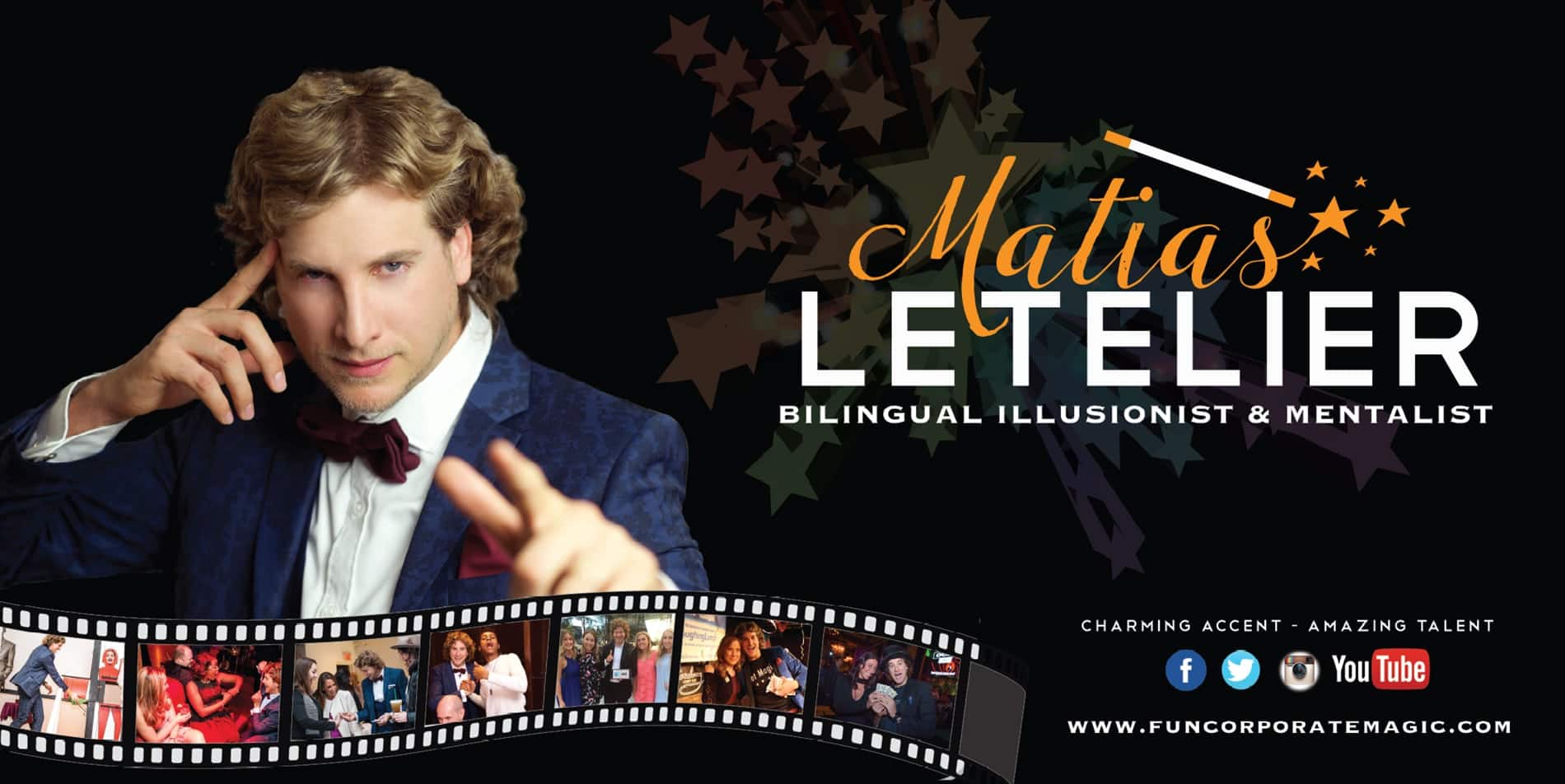 Who is the Top Family Magician in New York? Matias owes his magic to his uncle!

Every love has its beginning, and Matias Letelier’s began in early 2005—perhaps almost a decade earlier when he discovered for the first time the mind twister games (like separate two nails!). He immediately fell for this ingenious apparatus.

The first magic box Matias encountered belonged to his older brother, Julio—who said “Thanks” but looked elsewhere for adventure.  Matias could not resist, and this is how everything started. Very fast he learned how to manipulate the basic elements of a good trick: cards, bills and other illusions.  At a young age, he discovered a talent for amazing people.

In his college days, when Matias was pursuing his Business and Marketing Degree, a terrible family accident took place and his uncle, Jorge Barriga (photo on the left), who was a great magician on his twenties, died. Matias inherited part of his uncle’s magic library.  That was the moment he decided to take his hobbyist’s interest in magic to the professional level fusing it with his knowledge of business and marketing.

So he studied his Uncle Jorge’s books and learned the arts of Theory, Promotional Magic, Corporate Magic, Theatrical Magic, Psychology in Magic, Kids Magic and Communication Skills.  Then he developed his show, an immersive experience in which guests become part of the magic.  Why?   Because magic is not about the magician... it is about performer and audience together letting their imaginations flow with one astonishing effect after the next. With everything Matias learned in business school, he started his entertainment business in Chile where he performed for thousands of people at private parties, clubs, schools and corporate events.  At a young age, he became one of that nation’s most popular magicians. He joined the Chilean Magic Circle, an association of professionals, and rapidly became an influential magician who gave lectures both in marketing and in children’s magic.

His uncle's magic lives in him

In his shows there is always one trick magician Matias will do to honor the memory of his uncle! This is his way of saying "thank you Uncle George, wherever you are". Check it out on your show!

She did the magic on him not the other way! However, destiny had other plans for Matias, and it was in 2008 when he met Marlana, a lovely woman from the USA, who went down to Chile to study abroad for a year. They met and rapidly became good friends. While Marlana helped Matias improve his English, Matias did the same with her Spanish. They traveled together back and forward from the USA to Chile until, two years later, and only after Matias got her parents’ approval, they got engaged in 2010. At this point Matias left in Chile not only his family and friends, but also a successful magician’s career, to come to the USA and start again from zero! And wouldn’t you have done the same if you met the love of your life?

Matias and Marlana got married one year later on July 15th, 2011 in Austin, TX (where Marlana went to undergraduate school at UT). By then, Marlana had already been accepted in Teach For America and they were living in Connecticut.  There, Matias began his first formal entry into performing magic in the USA. He received amazing help from his friend Bryan Lizotte, a professional magician from Shelton, CT, who has been a great friend ever since.

Once again, in 2012, destiny moved Marlana and Matias to Boston, MA where she continued her studies at Harvard.  Matias promised Marlana he would will work as hard as possible so she that she needed only to worry about school, leaving the rest to him.  . And so he did. By the end of 2012, Matias rapidly positioned himself as the region’s expert in children’s magic and was awarded best Magician 2012. But it was not until 2013, with an explosive 300% growth in business, performing over 300 shows, that Matias fully arrived professionally in America. By the end of 2013 Matias was the Top Magician in MA, also awarded again Best Magician 2013.

And now Matias follows his love, Marlana, once more as she pursues her studies to in New York City.  She will pursue Doctoral studies at Columbia while Matias will work at becoming the Top Magician in NY!

We know you will be pleased after checking Matias’ references. You can be doubly sure he is ready to amaze you!

Because Matias is a proven, professional magician and the Top New York Magician with hundreds of 5-star testimonials, Matias will bring everything for the show so you won't have to worry about anything. Also Matias carries complete insurance, offers a money-back guarantee, sends you a contract and arrives early, making your planning process worry-free.

Matias’ goal is to MAKE YOUR JOB EASY
and make YOU look good for hiring him!

This is why we always tell our clients when they're looking for a reputable, reliable and experienced magician in the New York area for their child's party:

Leave the Entertainment in our Hands